(Not of the extra-terrestrial type.)

In some sort of autumn-cleaning madness I remembered I had three boxes/tubs of unfinished sewing and knitting projects that were packed up when I moved house. That's just disgraceful. Suffice to say, I've vowed to get rid of at least one tub ...

... first on the list is a shrug I started knitting in summer. I think I said at the time I'd aim to have it finished for winter, and laughed. Ha ha. It was maybe a third done when I took it out, and I'm 2 rows away from binding off the body. The sleeves are only 4 rounds of ribbing each, so I'm nearly there. I haven't knitted in months; it's a good recreation for those cold evenings. The laundry, where my sewing stuff is set up, is absolutely freezing in winter (think old house with nice thick brick walls except in the lean-to extension where the laundry is!!)

Photos to come when it's finished. Perhaps next I'll pick up the sock that was started two years ago, when I was pregnant with Evie. That's a bad case of second sock syndrome!
Posted by Georgie at 6:59 PM No comments:

Pyjama pants and a cardigan refashion

The cold nights of autumn have come upon us suddenly and the kids needed some new pyjama pants. I've got loads of printed flannelette so off I went: 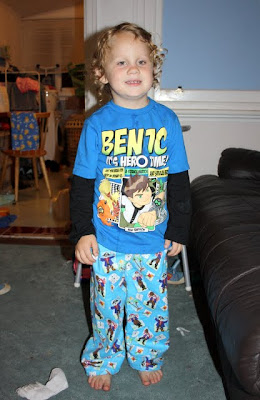 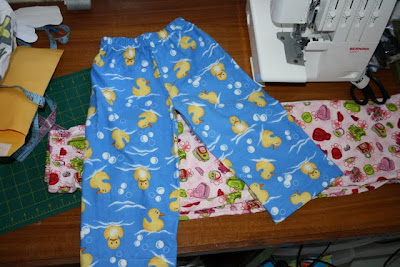 Duckies for Evie and a girly print for Emma 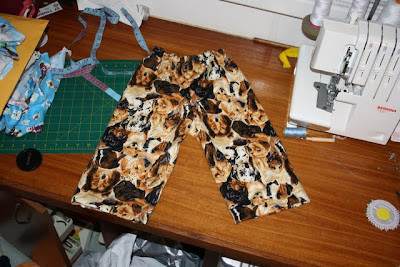 Puppies for Evie (I cut them upside down to fit into an oddly-shaped fabric remnant. Still, they'll be right way up to her, when she looks down at them!)

Alastair's and Evie's were made from a basic pyjama pants pattern I copied out of a friend's magazine a couple of years ago. Oddly enough, the two of them are about the same size except for leg length (Alastair is 4 and Evie is 20 months)! They both fit in a size two and I just lengthened the leg a lot for Alastair. Both of them still need room for a cloth night nappy, but these are a loose-fitting style.

Emma's I just made by tracing around a pair of her old ones and adding leg length, which is all she ever outgrows. I only JUST squeezed her pair out of a metre of flannelette; she is TALL.

They all wanted to wear them right away, which is always a good sign.

I also took two items off the alteration pile (trackpants for Alastair that used to be Emma's, just tightened the waist elastic, and took the legs up a couple of inches with a long stitch length; easy to let back down as he grows), and accomplished a refashion for myself.

I bought this cardigan (Millers, size L) in an opshop for $5. The chunky knit was what I'd been looking for, and I liked the huge collar thingy and the batwing-style sleeves, but it was too big and bulky. You can't really see all the extra fabric on the sides in the photo. If it had been wool, I'd have shrunk it a bit, but it's acrylic. 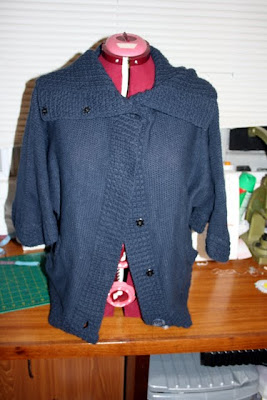 I took it in at the sides on an angle, so that instead of fastening all the way down it fastens at the top and then flares out. I've seen cardigans like that in the shops this season and I really like them (but not enough to pay $40 or $50 for one). I took off the extra buttons/press-studs so it looks like it's meant to be like that, and not like it's just too small for me ;) 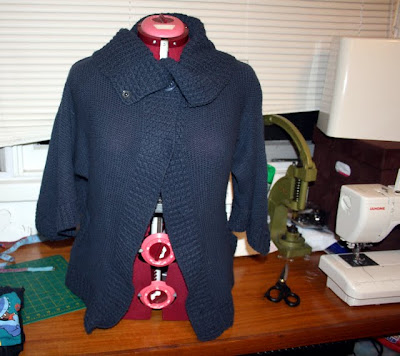 It still doesn't sit quite right when it's on; I'm considering sewing the little pockets shut to see if that helps. But I'll wear it, and I wouldn't have before. This is the first winter in a while that I'll be really wearing cardigans/jackets, because I don't wear Evie everywhere anymore (winter '06 and '07 I wore Alastair everywhere, winter '08 I was hugely pregnant which kept me warm, and winter '09 I wore Evie everywhere), so my wardrobe is sorely lacking in them.
Posted by Georgie at 3:01 PM 1 comment: