Save homebirth! Shame on you, Nicola Roxon!

As of July next year, homebirth with a private midwife will be illegal in Australia, if legislation being introduced to Federal Parliament goes through.

From my understanding, government-funded homebirth programs, such as the Community Midwifery Program here in WA, will still run, because the government covers insurance for them. However, these programs are very limited in scope: geographically; in terms of the number of places available; and in terms of a very narrow eligibility requirement. For example, I doubt I'd be able to get a place now because I've had two post-partum haemorrhages, a cervical tear and a 43 week pregnancy. Women who've had previous C-sections, are pregnant with twins or have a baby presenting breech at term are automatically excluded.

Whether or not *you* would want to have a homebirth - either at all or with any of those "risk factors" - is entirely your choice. But that's just what it should be: a choice. That choice is being taken away from Australian women.

Bewilderingly, our Health Minister, who is introducing this legislation, is a woman and a mother. Can she not see that this is a huge step backwards for women's rights?

Write your local member. Attend local rallies. Lobby senators (I think it's in the Senate, where the government relies on minor parties to get a majority, that we stand the best chance of defeating this Bill).

You might not want a homebirth, but what if your daughter did one day? Where does it end? What if all you want is a vaginal birth and suddenly the law told you that your care provider must perform a caesarean? Everyone has the right to informed consent ... unless you're a birthing woman.

Our bodies, our rights, our choice. Back off, Ms Roxon.
Posted by Georgie at 12:15 PM 3 comments:

I knitted this cushion cover for my friend's wedding present (the blue and red are almost identical to the theme colours they had for their wedding): 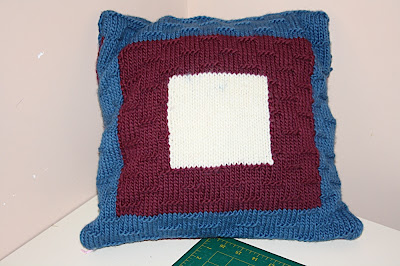 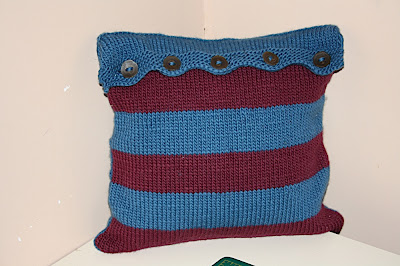 The buttoning bit is a bit wonky, and it's a bit big (I was paranoid it'd be too small for the smallest cushion insert, so I guess I over-compensated), but I made up the pattern myself and I'm pretty chuffed. Except for the funny part ...

The wedding was 18 months ago (I did buy her a gift at the time as well, I'm not a completely sucktastic friend). So, Tam, if you're reading this, I'm sorry I suck and we should meet up sometime soon so I can give you the world's most belated wedding present.

I had made an error on it, and I really, really hate undoing knitting, so it sat in the unfinished basket for ages. D'oh.
Posted by Georgie at 11:08 PM No comments:

So you know those nice humane mouse traps you can buy, where the mousey runs in, the door shuts, and then you take it and release it somewhere, and you're full of warm fuzzy love?

I gave you a chance, mouse. It's kill, kill, kill from here on in.

(I'm guessing it went in there last night, and before we got up this morning had managed to EAT ITS WAY OUT. The little bugger.)
Posted by Georgie at 10:21 PM 1 comment: 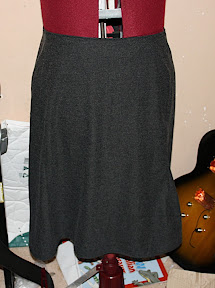 You'll have to take my word that this looks better on me than on the dress form! It *was* a size 22 Innovare skirt that I found on the $1 rack at my local op shop. Made in Australia, and simply gorgeous soft fabric. I am not a size 22.

I took all the seams in the required amount (which taught me a good deal about how a facing is sewn on to a skirt - I had to unpick the facing all the way round first), then tried it on and realised the length was unflattering too. I chopped a few inches off and now it hits just below my knees, which left a few inches of the slit in the back, just perfect!

Now that I have finished uni, it's vaguely conceivable I might do some out-of-the-home work at some point soonish, and all the stuff I wore in previous jobs is too small now :( (In all honesty, even if I were skin and bone, it would still be. My hips have expanded too. Not to mention my boobs.)

On a separate trip to the same op-shop - and purely by chance, as we were sheltering from the rain after Evelyn went to the chiropractor - I found the motherlode of secondhand Tupperware. Thirteen Modular Mates for $41! (Retail value: $266 new.) Made in Australia, interesting, cos it's not anymore.

Now envy my budget-priced organised pantry. I already owned some black-lidded ones, and these ones had green lids, but I'm not complaining: 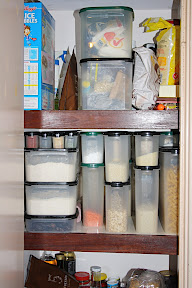 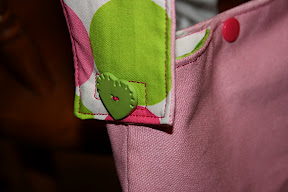 Emma has a birthday party to attend tomorrow, and of course I left the gift to the last minute. Enter the 1-hour bag tutorial, adapted a little to be child-sized. I also appliqued a matching T-shirt. 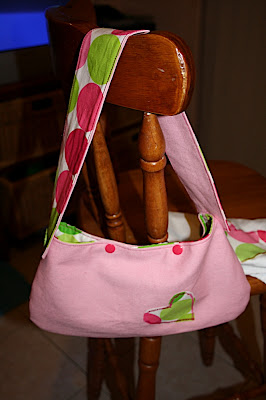 I did manage a few small projects while in stress-induced hibernation.

A library bag/tote bag - a birthday gift for one of Emma's school friends: 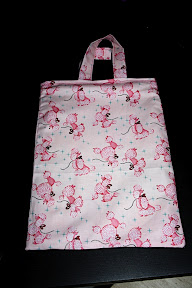 I repaired moth holes in a pair of longies that had been sitting in my repair basket forever: 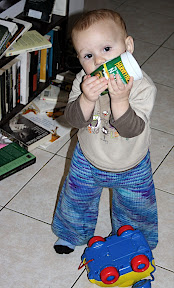 Just for fun, here are the same longies on Alastair when I originally knitted them two years ago - he would have been about 15 or 16 months old. 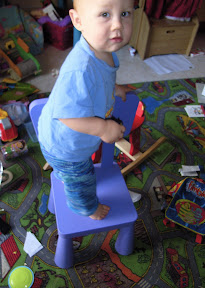 Oh, and I converted a woven wrap to a mei tai: 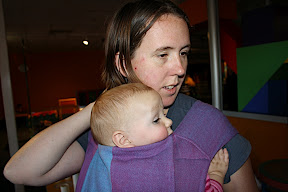 (although the body length is too long, so I need to find the motivation to unpick it and fix it properly)
Posted by Georgie at 11:48 AM No comments:

Yes, I'm all done with uni now, so perhaps I'll find time to blog (or even time to do something to blog about. My exam was yesterday and I've already finished a couple of lingering knitting projects that had been languishing at the bottom of the basket. Including a wedding present I was knitting for a friend. Her wedding was in November 2007. Oh dear.
Posted by Georgie at 10:35 PM 3 comments: