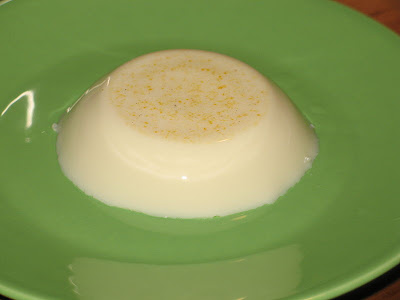 Unfortunately, that isn't MY blancmange. Mine didn't set nearly so firm; I don't think I left it in the fridge for long enough (5 hours or so). However, it was delicious!

We've been getting deliveries of raw milk and thus I've been looking for easy recipes that use up milk if we've still got a lot left towards the end of our week. I'm also trying to use it for desserts to avoid buying commercially-made ones. I remember my mum making blancmange, but I had never tried.

Blend cornflour with a litle of the milk.
Place the rest of the milk in a saucepan and bring to boiling point.
Add sugar and blended cornflour, stirring well the whole time.
Place over heat and boil for 2-3 minutes.
Flavour with vanilla essence then pour into a wet mould.

Or, instead of all of the above, just put all the ingredients in the Thermomix for 9 minutes at 90 degrees on speed 4, then pour into the mould.

Place in fridge to set.

I called it "milk jelly" and the kids loved it. I might try reducing the sugar by a tbsp next time, as it was plenty sweet enough.
Posted by Georgie at 11:16 AM No comments:

... you're an idiot sometimes. When I was talking about the Taga being hard to ride up hills, it turns out that it was user error. All three of my tyres were under-inflated. On Tuesday I rode up to a bike shop because we needed a new pump anyway, and I needed a properly-fitted helmet. I knew the single wheel (front in stroller mode, back in bike mode) needed inflating, but I thought the other two were okay. WRONG! The nice man in the bike shop fixed me up and inflated them all properly for me. I felt a little like I was playing the helpless woman, but really I was just the clueless bike n00b, my gender was irrelevant.

The ride home was a heck of a lot easier than the ride there. D'oh! It is now also much smoother, which meant when Evie fell asleep she was pretty comfortable.

So thanks to Greg Stoyles Cycles for helping me out (although that Yellow Pages map is wrong, it's Walter Road WEST, right near Sizzler, not over past Tonkin Hwy).

In other proof of my idiocy, I got the wrong day for my hair appointment - the other reason I went out that way - so I got to ride the 12km (6km each way) again on Wednesday!
Posted by Georgie at 10:39 AM No comments:

Email ThisBlogThis!Share to TwitterShare to FacebookShare to Pinterest
Labels: Taga

Here's a poor-quality phone pic of my new toy: 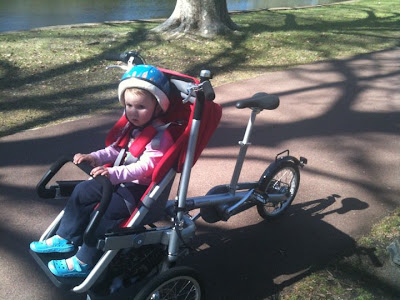 It's a Taga bike/stroller and it is very cool. My legs, however, unaccustomed to cycling, are finding it tough going.

- 3-wheel design makes it very easy for a non-cyclist like me to learn.
- the brakes are very responsive
- Evie is very comfortable in her seat when awake. She loves it and will climb into in the hallway and ask to put her hat (helmet) on!
- I can carry a reasonable amount of shopping underneath if I pack it in carefully. If I purchase it, I'll be investing in the panniers for water bottles etc.
- of course, it converts into a stroller! The conversion is quite easy and Evie can stay in her seat while I do it. This means I can take it into the shops, on the train, or through crowded footpaths where bike riding is not safe.

- my giant child. As you can see, the hood won't fit over her helmet. Other people can put their older kids in it, but Alastair (4.5) is much taller than the seat. This would be a problem in bike trailers and other child-carrying devices too. I just don't grow petite children.
- when she's asleep, her head bobs a bit ... but I think most child bike seats/cargo bikes would have this problem too.
- I'm having trouble getting up hills and am not sure if this is due to my lack of fitness or the bike only having three gears (probably a combination of the two).

So far I think it is a really fantastic concept, and well-executed to boot. I'm hoping that in a few weeks I'll really have gotten the hang of it, and that I can justify purchasing it!

*Disclaimer: I am on Taga's ambassador program, which means I am trialling the bike for 4 weeks for a refundable deposit, after which I may purchase it at a reduced price. However, all opinions expressed are my own true opinions.
Posted by Georgie at 9:10 PM 5 comments:

Email ThisBlogThis!Share to TwitterShare to FacebookShare to Pinterest
Labels: Taga

I'm sure that title isn't grammatically correct, but that's how I feel lately. Aside from the lamingtons in my previous post, I've barely baked the last few weeks. Heck, I've barely cooked proper dinners. We're fed, and clothed, and sheltered, but barely.

I landed a new job just before we left for Broome - I am calendar editor for a Perth parenting magazine. It is an awesome job, working from home, doing something that comes quite easily to me. BUT by the time I'd sorted out accepting the job and receiving the relevant documentation, I was just about on holiday. This left me less than two weeks after coming back in which to do the first month's calendar. Being my first, it was obviously more time-consuming than subsequent ones will be. So, that was a little stressful, but it is done.

I have all these brilliant, nerdy ideas of how to completely simplify the calendar compilation process by setting up an Access database. I haven't worked with Access in four years; this should be interesting. Of course, I have a genius programmer for a partner, but, rather like my stubborn two-year-old, I want to Do It Myself. Hopefully, that will mean I am more organised in future months.

The family all conspired to be sick last weekend, too, so I had kids home from school, sheets and carpet covered in vomit, all those fun extra jobs I really needed. Plus we've given up on installing the new dishwasher ourselves, so the kitchen is still drowning in dishes (called a plumber today, hurray).

SO, in all this, I have decided to put Evie in daycare one day a week. I'm hoping this means I can parent her properly on the other six days, instead of constantly trying to get my work done while she competes for my attention. She's just turned two; I figure it's worth a try and if she doesn't enjoy it, I will work out another way.

One piece of exciting news: I am expecting my Taga bike/stroller next week. I've been accepted as an Ambassador, which means I get to trial it for a refundable deposit on the condition that I promote it by riding at least 7 hours a week and wearing a branded T-shirt, among other things. Did I ever say I wouldn't sell myself for a good cause? Stay tuned for photos and reviews!
Posted by Georgie at 3:48 PM No comments: