My Solarveil ring sling was one of the first carriers I ever made, and the shoulder really wasn't comfy for me. It was a pretty poorly done pleated/Sleeping Baby Productions shoulder style with aluminium rings. I found it reaally hard to adjust as well. My SBP shoulder non-water sling is fine, but I think this was bad because (a) I suck at sewing that shoulder, and (b) I found it restricted my arm too much for playing with my other children in the swimming pool (particularly now that I have a 6yo AND a 2yo plus the baby).

So I cut out the rings, and I was scared because I can't get any more Solarveil, as the fabric is discontinued. (Although it was way too long so I could always cut more and start again.) Firstly, I overlocked the selvedge and did a rolled hem on that edge too. What can I say, I was lazy and figured since the selvedge wouldn't fray, it was ok, but the messy selvedge was making it harder to adjust. Then I put in nylon rings instead of aluminium, because Jan Andrea's site suggested the nylon are easier to adjust. The shoulder is a hotdog style, and I deliberately made it very narrow. I doubt I'll be using it outside water much, so long-term supportiveness isn't that important, it's more important that it not restrict my arm movement.

Of course, the baby's in bed, so I had to try it with Mr Panda, but I think I like it much better than I did before. 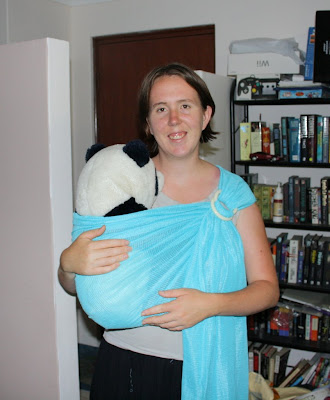 It's still too long, but I'm going to wait to check it's comfy with
Evelyn before I chop it for good. (I wrote this post last night and tried it this morning - very comfy, but I'm in my pyjamas so no photo!)
Posted by Georgie at 10:52 AM

And what is the special fabric? I wonder if you can get it in other places?

Non-water as in just a regular sling - the Solarveil is mostly for water use or very hot climates.

The manufacturer of Solarveil no longer manufactures it, as far as I know there isn't anything comparable out there. It's an open-weave, synthetic (so it doesn't hold water), UV-protective, strong fabric. Kind of like a shadecloth but suitable for next-to-skin applications.

I dont know what it'd be called, but maybe you can check here? Try here: http://www.joann.com/joann/ and if you find some, I'll play middle man :)